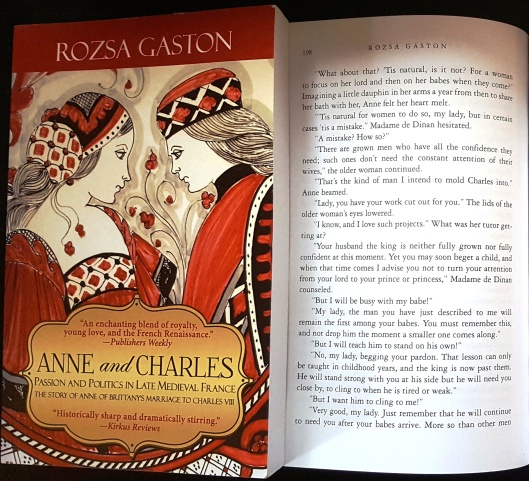 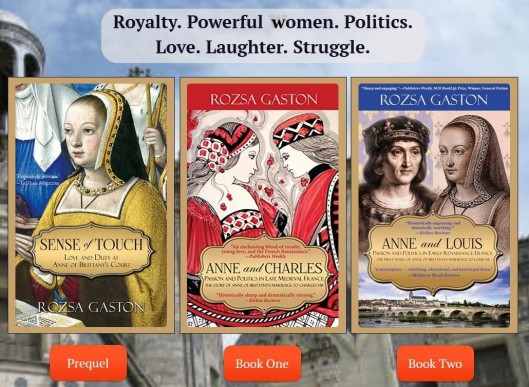 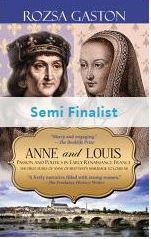 Delve into the world of 1499 France as the feudal era passes and Europe hurtles toward the Renaissance. Join Anne of Brittany, Queen of France, and Louis XII, King of France, as they host Cesar Borgia and Niccolo Machiavelli at their royal court.

Discover Anne’s maids of honor as they read the works of medieval female writers Christine de Pizan and Marie de France, some on the curriculum, some not.

Learn self-confidence, self-possession, and firm decision-making from France’s queen and Brittany’s ruler Anne of Brittany, who reaches across the centuries and offers a role model to women in leadership today.

A two minute discussion of the basis of Anne of Brittany’s self-confidence
with Michael Dandry of WVOX 1490 AM, New Rochelle, NY, Mar. 12, 2018

Originally posted on Fine Wines Fine Quotes:
Anne of Brittany was born on January 25 or 26, 1477, in Nantes, France. She was…

Who was Anne of Brittany? 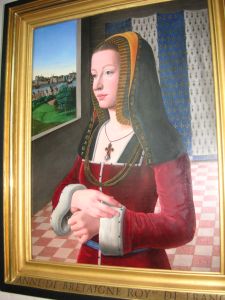 Ever since picking up Mildred Allen Butler’s book on Anne of Brittany a few years ago (Twice Queen of France: Anne of Brittany. New York: Funk & Wagnalls, 1967), I’ve been fascinated by this French queen who came to power at age eleven as ruler of Brittany, then became queen of France at age fourteen.

Anne of Brittany’s travails trying to bring live children into the world rival any woman’s in history. This girl/woman went through the wringer as a mother. Her fourteen pregnancies resulted in the survival of two children, both daughters.The rest? Three miscarriages, five stillborn infants, one son dead after three hours, one daughter dead after one day, another son lived three weeks, her longest living son survived to age three when he succumbed to measles. As a public figure, this queen’s drama played out on the stage of all of France. If I had made this up, readers wouldn’t believe it. But it’s all true, and carefully historically documented.

I began to wonder why Anne of Brittany’s story is not well known. Many modern women share the same secret heartaches their medieval and ancient sisters suffered: pregnancy loss, inability to bring a live child into the world, inability to keep a child alive once born. Women still struggle with these issues and still suffer in silence when pregnancy and childbirth loss occurs. My heart aches for every one of them.

I wanted to bring alive Anne of Brittany’s tale for modern women, may of whom share her story in suffering and in courage. At the same time this brave woman endured continual personal tragedy she achieved great success as queen of France. She provides the world with an exceptional model of fortitude and resilience in the face of great personal suffering. Brava, Anne of Brittany!

I could say more, but I’ll save it for the sequel. Anne of Brittany: Girl Who Ruled a Country should arrive in early 2017. Meanwhile, please join me in discovering the remarkable historical figure of Anne of Brittany in my new release Sense of Touch. 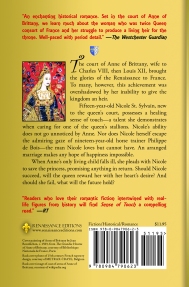 Sense of Touch back cover 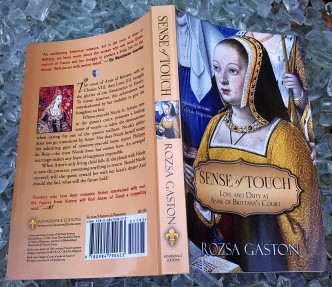 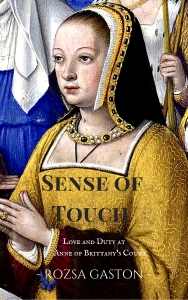 Sense of Touch is coming soon. My seventh and latest novel is based on the life of Anne of Brittany, twice Queen of France. Her dates? 1477-1514.

Sense of Touch has been chosen by Kindle Scout for a 30-day pilot program to see if readers get interested in this story. If the book receives enough nominations by Oct. 19, 2015, it will be chosen for publication by Kindle Press. That’s a very big deal. Why? Worldwide distribution.

Why am I excited about Anne of Brittany? This remarkable woman, Duchess of Brittany in her own right, and twice Queen of France due to marrying well, lived exactly at the convergence of the Middle Ages with the Renaissance. What does that mean?

To put it in a nutshell, it means goodbye to collective identity and hello to self-identity. My writing platform is all about self-identity, as in how do women achieve their own? Then, how do they hone it through the years as professional and family obligations conspire to obliterate their special je ne sais quoi?

Anne of Brittany did a great job of maintaining her own sense of self. Her motto? A ma vie, to my life. It takes a confident woman to have a motto like that.

Here’s the gist of Sense of Touch. 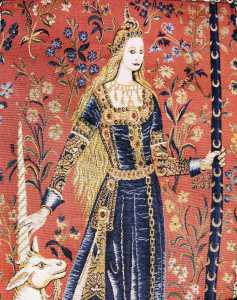 Tapestry design based on Le Toucher from The Lady and the Unicorn series. Courtesy METRAX-CRAYE, Belgium

NICOLE SAINT SYLVAIN serves at the court of Anne of Brittany, Queen of France, in 1497, at age fifteen. Working with horse trainer Philippe de Bois to heal the Queen’s stallion, she shows an aptitude for diagnosing horses’ ailments through her sense of touch. Soon she has fallen in love, but not with the man her father has chosen for her. Duty pulls Nicole and Philippe in different directions and Nicole becomes a wife, mother, then widow while immersing herself in the healing arts. When Anne of Brittany begs her to save her infant daughter, Nicole works alongside a physician from the South whose reputation for healing began with his work with horses. Will Nicole succeed in saving the Queen’s daughter? And if she does, will the Queen reward her with the greatest desire of her heart—marriage to the only man she has ever loved?

ANNE OF BRITTANY inherited the Duchy of Brittany at age eleven upon her father’s death in 1488. Three years later she married Charles VIII and became Queen consort of France. Instrumental in introducing new techniques of architecture and craftsmanship from Milan to France, Anne of Brittany ushered in the Italian Renaissance to France. By age twenty-one she had buried her husband and all four of her children. Within nine months she became wife of the new king, Louis XII. Pregnant fourteen times, seven times by either king, she raised two children to adulthood. Both were daughters.

She is known as the first female ruler of France to bring together young women of noble birth at court, where she educated and trained them, then arranged appropriate marriage matches. A ruler of influence, refinement, and resources, she rose above personal loss with dignity and grace while espousing the cause of women’s advancement. Her story is for women everywhere.

I would be delighted if you would click here to nominate Sense of Touch for publication. You’ll find an excerpt from Sense of Touch too. Enjoy and thank you.